ATLANTA, GA – ACCG, Georgia’s County Association, recently honored Dougherty County Chairman Christopher Cohilas with the 2022 Emory Greene Leadership Award. Part of the ACCG Annual Awards and Recognition Program, the Emory Greene Leadership Award is the highest level of recognition a government official can receive from ACCG and is reflective of their achievements and impact during their time as an elected official.

“The ACCG Awards & Recognition Program is an annual celebration of county leaders,” said Dave Wills, ACCG’s Executive Director. “The awards embody the true definition of leadership, dedication and selfless service, as exhibited by Christopher Cohilas. Congratulations to Christopher on receiving this honor.”

Christopher Cohilas has been positively impacting his community since his days as a young prosecutor. From serving as the Chief Assistant District Attorney in the Crimes Against Women and Children Unit to being a founding member of the Lily Pad SANE Center, Cohilas’ has dedicated his life to protecting others. Throughout his career, he has received several accolades including the State Bar of Georgia Young Lawyer Ethics and Professionalism Award, the Justice Robert Benham Award for Community Service, the Martin Luther King Day “Dream Award” for service to the Southwest Georgia Community and has been named one of Southwest Georgia’s 40 under 40 and Georgia Trend’s 100 Most Influential Georgians. He also chairs the Georgia Public Defender Council.

Chairman Cohilas is a champion for Dougherty County and the State of Georgia. He has led the county through many hardships including four Presidentially declared natural disasters and continues to guide his community during the COVID-19 pandemic. Cohilas’ dedication, passion and love for his community has made him more than deserving of the Emory Greene Leadership Award.

“I am truly overwhelmed, humbled, and honored to receive this prestigious award,” said Cohilas. “Emory Greene was known as an outstanding leader in his home county of Bibb and as a statewide leader, who was cherished by his community for his unparalleled leadership and service. I have known for a long time that it is my purpose in life to work and fight for others. I have been blessed to be able to do that as a prosecutor, a private attorney, and an elected official. Even though Dougherty County has been through unprecedented events and disasters over the past five years, it truly has been my honor to serve and fight for all of my fellow citizens. I am most grateful to ACCG for this award and the citizens of Dougherty County who have trusted me to earn it on their behalf.”

The Emory Greene Leadership Award was created in 1990. It is named in honor of the late Emory Greene, Chairman of the Bibb County Board of Commissioners and former ACCG President, who was not only an outstanding leader in his home county but a statewide leader who served on several boards and commissions. The Emory Greene Leadership Award recognizes a county commissioner who has made significant contributions in the local community and at the state level.

A graduate of the University of Georgia with a bachelor’s degree in English and a minor in Criminal Justice, Cohilas holds his Juris Doctor degree from Georgia State University’s College of Law. He is a partner with the law firm of Watson-Spence and is currently serving his second term as Chairman of the Dougherty County Board of Commissioners and actively seeking a third term during this year’s election. 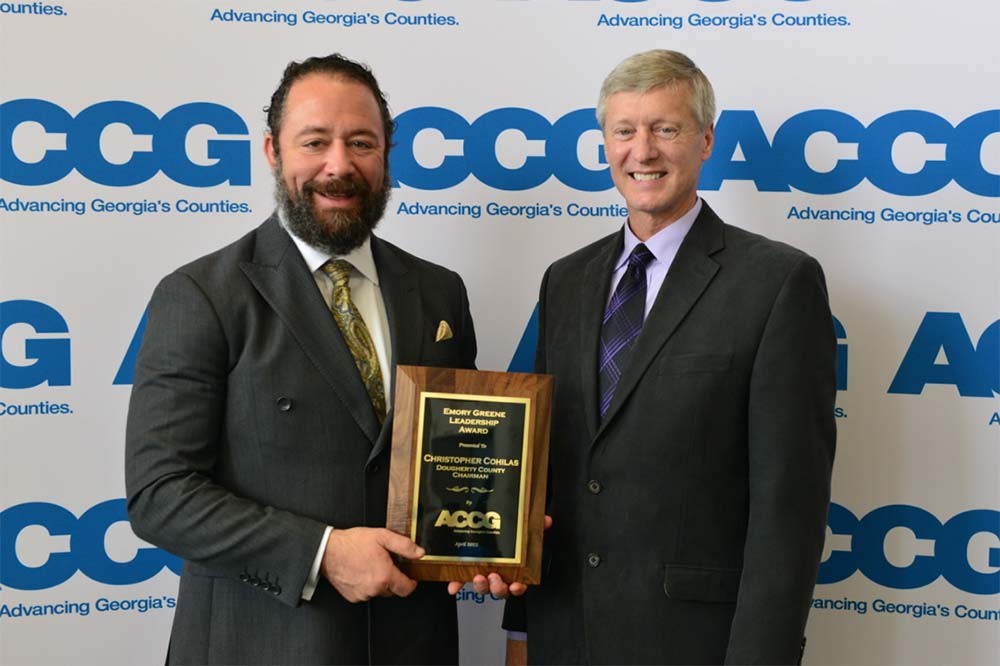 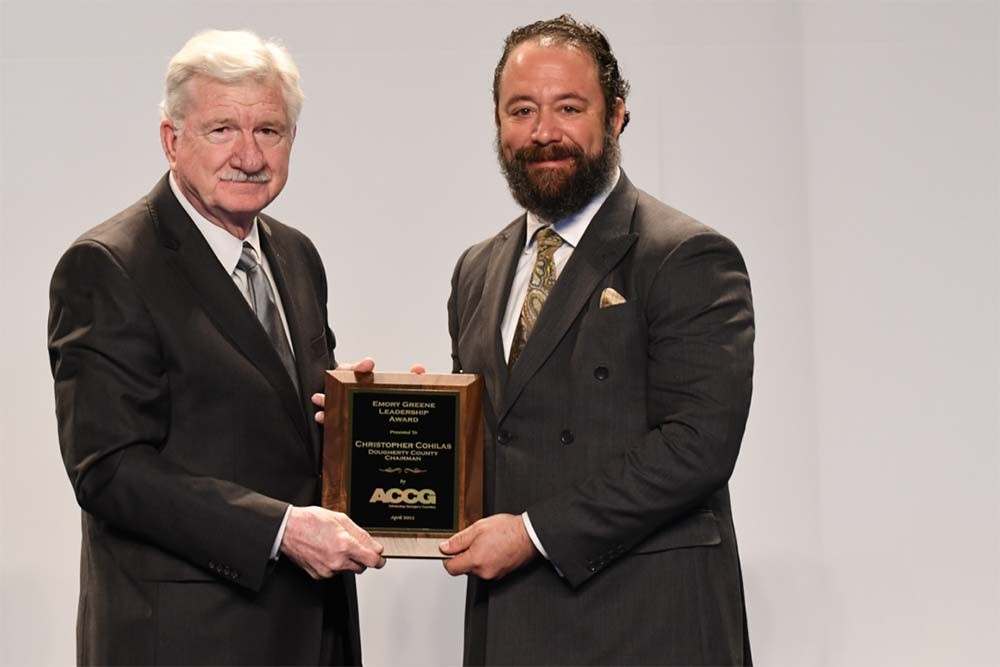