DOUGHERTY COUNTY, GA – Revitalization of what was once a thriving Radium Springs community concept led local area artist, Chris Johnson, to the freshly finished mural at the Radium Springs lift station. For most artists, a personal tie to a meaningful work of art is the norm, but for Johnson, it went a little deeper and into his childhood roots of fond memories at Radium Springs.

Around age 11, Johnson and his family located to Albany when his dad transitioned to the Marine Corps Logistics Base here. As a child, he has many fond memories of growing up in Radium Springs and even playing golf at the old Radium Springs Golf Course. Residing here during the Flood of 1994 and the fire of 2000, witnessing the devastation of the old casino, which was eventually demolished, Johnson said that when he was approached by county leaders to create the mural on the lift station at the Spring Run Bridge, he wanted to really reflect on the location and all the significant events around what had happened in the area.

“Murals hold a significant meaning of an area and I had to package every aspect of what this area had been through in this creation,” said Johnson.

County leaders specifically asked for a nature theme and that’s where it all started with Johnson’s creation. At the top of the tower, the sky plays a prominent role in telling the story of the area, especially through the dark blue clouds, signifying the storms that had ripped through the area. The orange colors that are melted into the sky signifies fire and winds, which were the two things that eventually wiped the casino out.

“The painted skies will definitely reflect the changing seasons as they happen at Radium Springs and that was one of my primary goals,” said Johnson.

Cascading down the lift station from the sky flows artistic renderings of the casino, the Native American heritage that is part of Radium Springs, and nature itself, including the habitat and wildlife aspects of the area. In fact, on one side, visitors to the tower are struck with vivid imagery of Native Americans and their canoes, while on opposite sides, a majestic Blue Heron is on watch and the great turtle native to the area is on the land, marking its symbolic territory.

“The Blue Heron is one of my favorite animals,” said Johnson. “They are such graceful creatures and I’ve even had one that’s been hanging out around the station as I’ve painted and I’m convinced it’s in love with the large Blue Heron that stands tall on one side of the station, because it keeps coming back.”

Although Johnson sketched around the station each day in the less than two-week span of time he took to finish this creation, and spent time on areas as it came to him, the last component was the turtle, because he felt the turtle not only provided a symbolic meaning for the area, but also was a creature of resilience, adapting to both land and water, which added to the strength of Radium Springs.

“The Flint River is alive in the background of the station, and the turtles are everywhere, even on the water meter covers that lead back to the river,” said Johnson.

Working around what he referred to as a “loose plan that would change and evolve into the final piece,” Johnson had originally slated three weeks to complete the mural, but the creation flowed must faster, placing his completion in an incredible less than two-week time span.

In his full-time capacity, Johnson is a Professor of Art at Andrew College in Cuthbert, Georgia, where his philosophy is to foster a change in communities through public art and he works to instill this into his students.

“I take my students out, we meet with communities to figure out the aesthetics of what they want to achieve and highlight – the design – then, coordinate that with the people to complete the design, which is a big part of what we do,” said Johnson. “The students go and do the prep work, so the idea is that they come to Andrew, learn the skills, and then, go out into the communities and make big changes.”

Many of Johnson’s students have ventured back into the communities where they are from and have established themselves as “the artist” in that area, and Johnson said that’s “really cool stuff.”

“It’s all about revitalization of old, communities, and much more,” he said.

Although the Spring Run Bridge is not yet open to the public, the lift station is visible from the trailhead parking area. This is just another component of Dougherty County’s Radium Springs revitalization and improvement, which continues to thrive and soon, a grand reopening of the entire area will be planned by the county. 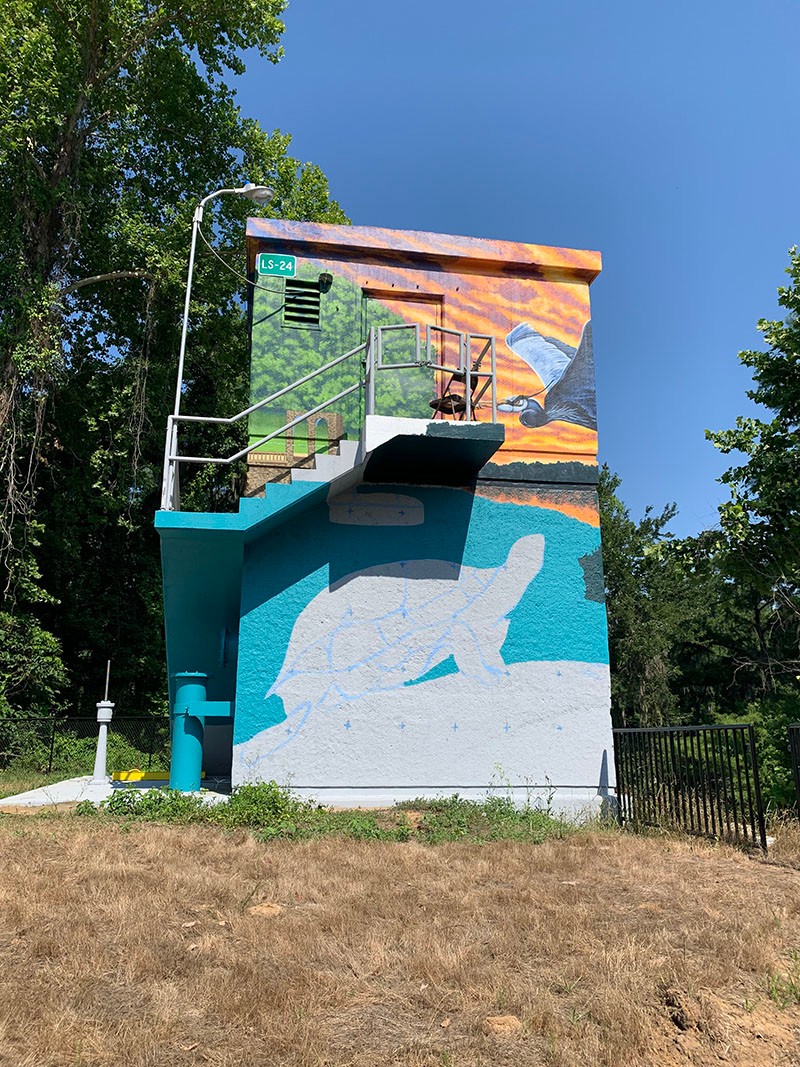 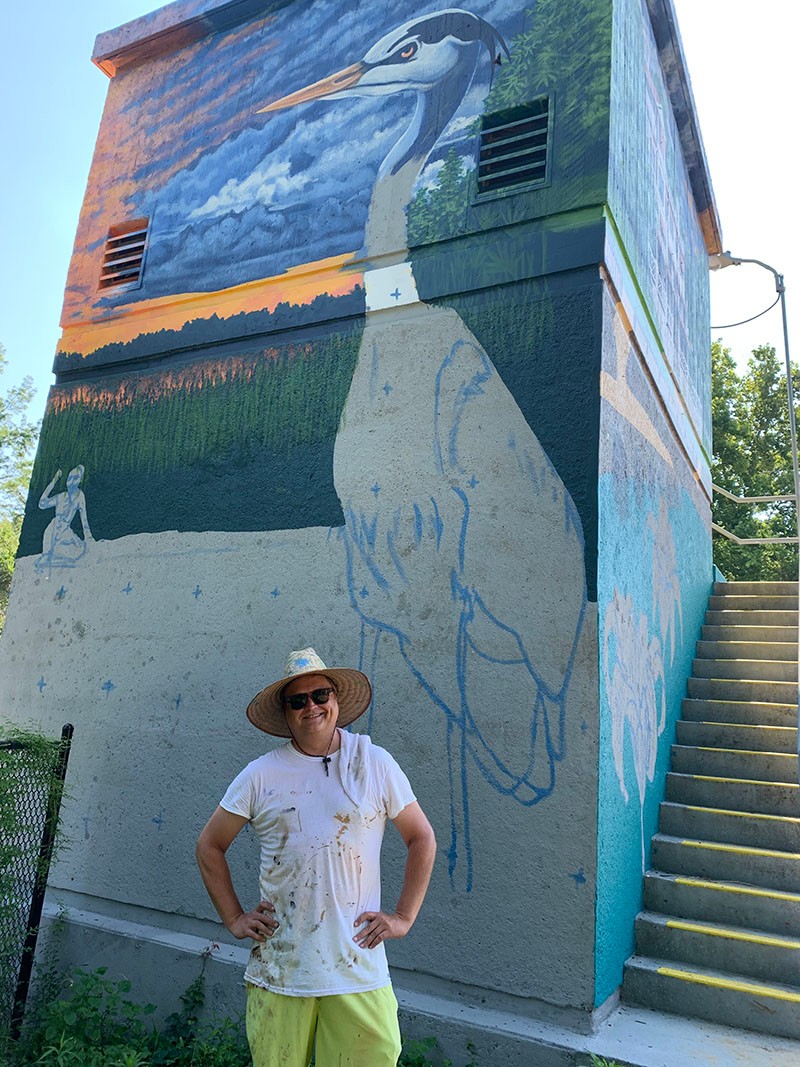 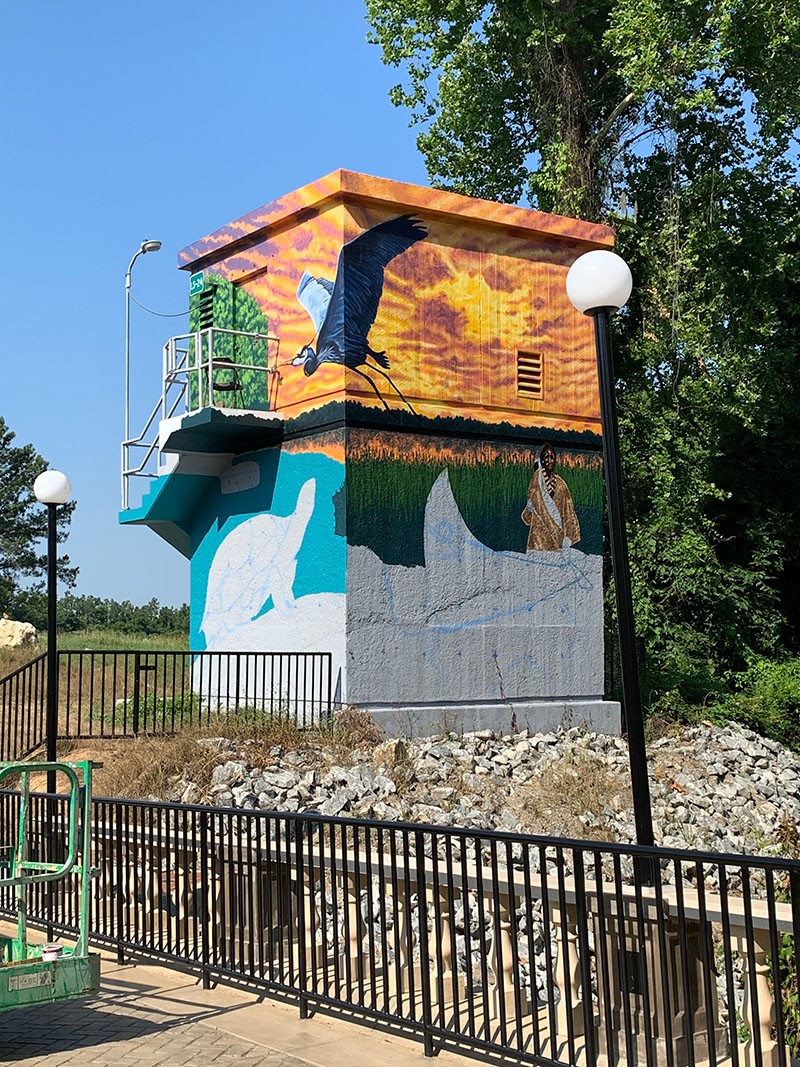 Although Johnson sketched around the tower each day in the less than two-week span of time he took to finish this creation, and spent time on areas as it came to him, the last component was the turtle, because he felt the turtle not only provided a symbolic meaning for the area, but also was a creature of resilience, adapting to both land and water, which added to the strength of Radium Springs.